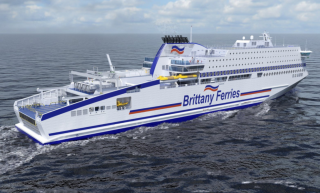 zoomImage Courtesy: Brittany Ferries
The European Investment Bank (EIB), Societe Generale and Brittany Ferries have inked the first green maritime financing under EIB’s EUR 750 million Green Shipping Guarantee (GSG) programme.
The new vessel Honfleur will be Brittany Ferries’ first liquefied natural gas (LNG) powered ferry. It is scheduled to enter service in April 2019 on the company’s Caen-Ouistreham (France) and Portsmouth (UK) route.
The signing ceremony took place on December 11 at the Ministry for Europe & Foreign Affairs, at Quai d’Orsay in Paris.
In 2016, as part of the investment plan for Europe (Juncker Plan) and the Connecting Europe Facility (CEF), the EIB and Societe Generale signed a EUR 150 million guarantee framework agreement to support shipbuilding, and the modernization of existing vessels for sustainable transport and the protection of the environment, in line with the objectives of COP21.
Societe Generale acted as the main arranger of the EUR 142.6 million financing for the acquisition of the Honfleur ferry commissioned by Brittany Ferries, which includes a tranche of EUR 49.5 million fully guaranteed by the EIB.
“This green financing in the maritime sector is a ‘first’ at the European level,” EIB Vice-President, Ambroise Fayolle, said.
“This financing will enable Brittany Ferries to improve the energy efficiency of its vessels and thus reduce their ecological footprint. This low carbon project goes in the direction of history, with the One Planet Summit just getting underway. And more and more clean energy projects will be financed under the European Fund for Strategic Investments 2.0,” Pierre Moscovici, European Commissioner for Economic and Financial Affairs, Taxation and Customs, said.